The United Nations Security Council last week passed new sanctions on the North Korean state, aiming to curb the country’s nuclear and ballistic missile capabilities. The latest U.N. action banned textile exports from the Democratic People’s Republic of Korea (DPRK) and imposed more stringent inspections of ships suspected of carrying illegal materials. At the same time, petroleum has become a crucial tension point in the United States’ attempt to scale back North Korea’s nuclear ambitions. The U.S. proposed an immediate ban on all oil imports to undermine the North Korean regime. Although that proposal was pared back, gasoline and diesel imports were cut by nearly 56 percent, and the U.N. capped crude oil shipments at current levels.

Last week’s U.N. action has already had a significant effect on the country’s oil sector. While details about price impacts are limited by the regime’s restriction on information within the country, a Reuters analysis of data compiled by the Daily NK website—which is run by North Korean defectors who collect price data through phone calls with in-country fuel traders—indicates populated urban centers have been impacted. Mid-September gasoline prices in the capital Pyongyang and the northern border cities of Sinuiju and Hyesan jumped more than 45 percent to $2.51 per kilogram compared to early September.

An armed confrontation has the potential to be disruptive to oil markets, even though North Korea is not a producer and consumes only 15,000 b/d.

The escalating conflict between the DPRK and the international community has exposed numerous economic and geopolitical security concerns across the Asia-Pacific region. The Trump administration on Thursday announced new sanctions targeting “individuals, companies, financial institutions that finance and facilitate trade with North Korea.” An armed confrontation has the potential to be disruptive to oil markets, despite North Korea not being a producer and consuming only 15,000 b/d—although consumption could be higher since demand is likely underreported. According to an analysis by the consulting group Wood Mackenzie, in a worst-case scenario more than 13 million barrels per day of global seaborne crude oil trade could be disrupted by military intervention on the Korean peninsula. WoodMac also says more than half of China’s crude oil production—55 percent—is located in provinces adjacent to a potential conflict zone. A conflict could also disrupt Russian upstream production.

The international dialogue surrounding North Korea’s nuclear ambitions has primarily centered on economic restrictions and diplomatic interventions, all of which have attempted to deter the country from further developing its nuclear weapons capabilities. Starting with an October 2006 denouncement reprimanding Pyongyang for its first successful underground nuclear weapon test, the U.N. Security Council adopted a series of resolutions expressing concern over North Korea’s nuclear and ballistic missile technology programs. Last week’s measures—which earned the approval of Russia and China, two of North Korea’s closest allies and members of the Security Council—were notable for being the first oil import restrictions.

China’s willingness to go along with the U.N. oil sanctions provisions underscores the increasingly complex relationship between Pyongyang and Beijing.

In particular, China’s willingness to go along with the U.N. oil sanctions provisions underscores the increasingly complex relationship between Pyongyang and Beijing. China is the DPRK’s main crude oil and refined products supplier. North Korea has limited upstream development and reportedly inconsistent crude oil refining capacity. The Ponghwa Chemical Factory, located on Yalu River on the Sino-North Korean border, is the DPRK’s largest oil refinery, but it suffers chronic outages due to low and unreliable deliveries of crude by rail from China’s Daqing oilfields. China and North Korea have historically shared a special relationship, owed in part to China’s support for North Korea during the Korean War. But more recently, the relationship has become increasingly difficult for China to manage.

The sticking point with the international community has been China’s unwillingness to take stringent actions against North Korea. China’s decision to back the international community’s limitations on oil exports was a big step in negotiations with Pyongyang. Following the DPRK’s sixth nuclear weapons test earlier this month, the influential Chinese tabloid the Global Times ran an editorial warning North Korea against any further provocations, cautioning that Chinese society may approve of measures to cut off North Korean oil supplies or shut down the border.

“If China supports more radical economic sanctions that directly threaten the stability of the regime, then it is possible that North Korea becomes as hostile to China as to the United States,” Zhao Tong, a North Korea expert at the Carnegie-Tsinghua Center in Beijing told Reuters.

As North Korea has developed its nuclear weapons capabilities, fewer companies have been willing to forge partnerships there, either because of restrictive sanctions or the country’s barren investment climate.

As North Korea has developed its nuclear weapons capabilities, fewer companies have been willing to forge partnerships there, either because of restrictive sanctions or the country’s barren investment climate. In 2014, a Mongolian oil company, HBOil, signed a joint venture with North Korea’s state oil company to develop the country’s unexplored onshore oil resources. The deal was discontinued after being targeted by a new round of U.S. sanctions earlier this year. Flagging development like these have given the Chinese enormous leverage. The DPRK has a large trade imbalance, highlighting its large dependence on goods (in particular, petroleum) from China. Its only valuable export is coal. 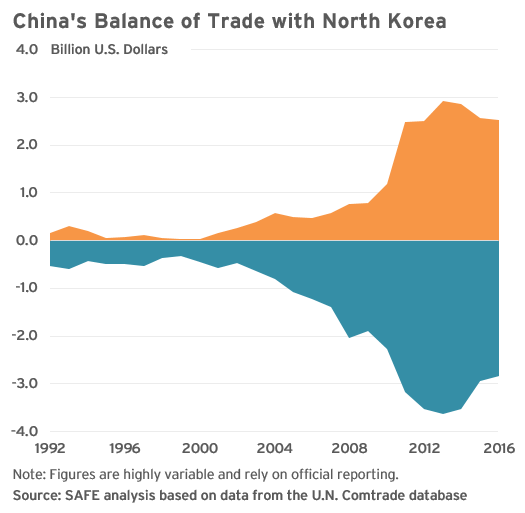 In July, state-run China National Petroleum Corporation (CNPC) temporarily suspended fuel sales with North Korea, a move that analysts say was intended to force the country to make payments on fuel imports. According to China’s official customs office, exports to the DPRK fell 97 percent month-over-month in July to just 120 metric tonnes. Analysts, however, have noted that official Chinese statistics can be unreliable. According to The Heritage Foundation, in 2014 and 2015, China reported zero oil exports to North Korea, recharacterizing oil deliveries as aid instead of trade. Rather than fully rely on the Chinese, the DPRK, the Washington Post reported, is receiving refined products from Russia through black markets, undercutting the effectiveness of any actions China takes.

Oil is a flashpoint

Oil is at the center of many conflicts around the world, whether civil war in Libya, militant sabotage in Nigeria, Venezuela’s meltdown, or the U.S. targeting ISIS-controlled oil wells. With the tension surrounding North Korea, oil never loomed large, until recently, when the U.N. has used oil sanctions as a way of getting other countries to cooperate. The sanctions may have some efficacy, but in order to get North Korea to give up its ballistic missile technology, the U.S. has to convince China to continue to cooperate because of its status as a supplier of oil and refined products to North Korea.

Oil is at the center of many conflicts around the world, whether civil war in Libya, militant sabotage in Nigeria, Venezuela’s meltdown, or the U.S. targeting ISIS-controlled oil wells.

Beyond sanctions, a conflict on the Korean peninsula would be disruptive for the global economy. The impact on the oil market, however, is unclear. “The severity of any disruptions would depend upon the area under influence, timing, duration, intensity and nature of the conflict,” Woodmac says.